An 80-year legacy of hard work, dedication and teamwork

In the early morning hours, before most of the Cal Poly campus even begins to stir, a group of dedicated students make their way to the rodeo grounds to begin their day. There are horses and stock to feed, work to be done around the grounds, and with the first day’s light, practice begins.

Cal Poly Rodeo is one of the most decorated and historically prestigious rodeo programs in the nation and has produced more professional stars than any other. With more than 80 current students enrolled with academic interests spanning the university, and an enviable recent track record at the regional and national level, Cal Poly Rodeo is now widely regarded as one of the best rodeo programs in the country.

The program’s legacy is wrought by the hard-work, dedication, perseverance and conviction of both those who came before in the program’s 80-year history, and on the current resolve of those who work hard every day to preserve and honor it. The program is dedicated to generating student athletes who embody Cal Poly’s Learn by Doing philosophy, educating and training future leaders steeped in hard work and with an appreciation for the western way of life.

Randy Bernard (Agribusiness, ’92) has led a prestigious career both in and out of the rodeo arena as former CEO of both Professional Bull Riders and IndyCar. He is currently co-managing Garth Brooks. “You don’t have to come from a ranch or farm to enjoy the western way of life,” Bernard said. “Many people come from large cities. It is about people who share the same values, work ethic and a culture that is built on honesty, politeness, responsibility and respect of others and animals.”

Bernard jokes that he has been a part of rodeos since his first steps, but it was his involvement in the Cal Poly Rodeo program that he credits with setting him on a pathway to success. “It was a great place to learn about leadership, fundraising, sponsorships and to communicate and promote the program,” he said. “I’ve been able to take those foundations and build upon them through life and I have to give Cal Poly credit for allowing me to grow through the Learn by Doing philosophy at the university.”

A fundraising initiative was recently launched to raise $5 million to establish the Cotton Rosser Rodeo Endowment to support the future of Cal Poly’s Rodeo in perpetuity. The endowment will honor rodeo legend and Cal Poly alumni Cotton Rosser, one of the founding members of the program, and ensure that the Cal Poly Rodeo program will always have the funding and resources needed to not only survive, but to thrive. The endowment will fund student success to ensure students have access to professional development opportunities, internships and assistant coach positions. It will also assist with needed facility improvements and ongoing operation costs such as practice stock, feed, maintenance and minor repairs and team travel.

In recent years the program has relied on proceeds from the annual Poly Royal Rodeo to continue operating – this endowment will ensure that the program’s operation is not reliant on any one event. It will also guarantee that the program can continue to grow and provide new opportunities for students, cultivating them to prepare a strong foundation for future success in their chosen fields.

“Providing practice, sport, community, and a way of life is my first and foremost responsibility,” Coach Ben Londo said. “I am extremely humbled by the opportunity to lead this program. The sport that has given me all that I have and everything I hold dear is in my hands to share with others. I get to share the core values of western life with the world through rodeo. It is a torch that has been carried by many far greater than I.”

The sport that has given me all that I have and everything I hold dear is in my hands to share with others. I get to share the core values of Western life with the world through rodeo.

The endowment will fund opportunities like those offered to Sierra Spratt, assistant coach, who is enrolled in a master’s program while also helping to lead the Cal Poly Rodeo’s Women’s Team to be the highest ranking in the nation. “Joining the team as an assistant coach and being able to pursue my master’s degree is an incredible opportunity,” said Spratt, who has a successful background in the rodeo arena and plans to compete in the professional circuit. “The comradery of the team, the effort that Ben Londo puts into it, and the program is unlike anything I have ever seen. Cal Poly has changed my life – and changed it for the better.”

Katie Whitney (formerly Rice), who earned a master’s in agricultural education in 2018, competed with the Rodeo Team for five years, also serving as an assistant coach. She followed in the footsteps of father and brother, both who graduated from Cal Poly. Whitney is now the marketing director for the Cactus Group, which includes the brands of Cactus Ropes, Cactus Gear and Cactus Saddlery – a job that she secured from the network she made while a part of the Cal Poly Rodeo program. “The rodeo program definitely teaches you time management. You are responsible for caring for your horses, maintaining your grades, while also pushing yourself for success in the arena,” she said. “I got up almost every day at 5 a.m. to make our 6 a.m. practice, then went to class, came back to practice more, back to class, then studying, and more care for your horses. Every single day! And I would do it that way five times over. I would not be who I am or where I am today without it. I am forever grateful and indebted to Cal Poly Rodeo.” 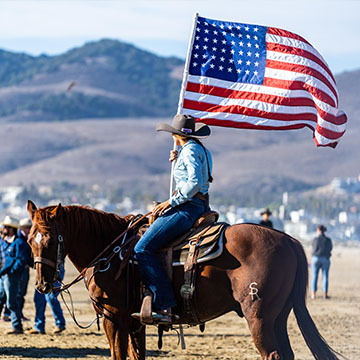 When the COVID-19 pandemic eliminated all opportunities for competitions, including the annual Poly Royal Rodeo for two consecutive years in 2020 and 2021, Londo continued to work with students in and out of the arena – finding creative ways to allow them to continue to compete in the sport they love.

As students returned in fall 2021, Londo and graduate student DeLisa Fracchia began planning the unthinkable: a breakaway roping competition right on the sand in Pismo Beach. Working in uncharted waters, Londo and Fracchia started working from the ground up — securing necessary permits, determining the arena layout, getting approval forms signed, and even contending with Mother Nature. Slowly but surely, what began as a vision came to fruition.

From local surf shops to loyal, longtime supporters, the event had a united backing. And on the evening of Sept. 19, when the sunset hit the sand, live cattle and 25 breakaway ropers earned the chance to say they were the first ever Cal Poly students to rope a calf on the Pismo State Beach. The arena was surrounded by family and friends shoulder-to-shoulder waiting to watch the first ever Break-A-Wave Competition.

From local surf shops to loyal, longtime supporters, the event had a united backing. And on the evening of Sept. 19, when the sunset hit the sand, live cattle and 25 breakaway ropers earned the chance to say they were the first ever Cal Poly students to rope a calf on the Pismo State Beach. The arena was surrounded by family and friends shoulder-to-shoulder waiting to watch the first ever Break-A-Wave Competition.

The Cal Poly Rodeo program has been a rich part of the university’s history since 1939, when 15 student athletes paved the way for decades of success by gathering to compete at the C Bar G Ranch near Victorville, California, about 93 miles east of Los Angeles. It was the first intercollegiate college rodeo of its kind and the beginning of a strong, successful history for the Cal Poly program.

In 1940, the very next year, Cal Poly students organized the first campus collegiate rodeo as part of the annual open house known as Poly Royal, where it continues to be a showcase of student grit, talent and perseverance. Nearly 70 students participated in Cal Poly’s first rodeo, all with roping or riding experience. Among the participants were the students who won first place at the national intercollegiate rodeo in Victorville. The half-hour program was broadcast over the San Luis Obispo KVEC radio station and the rodeo was the most popular event of the entire weekend.

Rodeo legend Cotton Rosser (Animal Husbandry, ’52) has also played an integral role in the Cal Poly Rodeo legacy, serving as the captain of the Rodeo Team and establishing the traditional Poly Royal Rodeo, which continues to this day. Originally built of chainlink fence and bailing wire, a modest arena hosted more than 4,000 spectators in the rodeo’s inaugural year. Rosser went on to innovate the rodeo industry, introducing crowd-friendly components that are now standard in the sport.

Today, Poly Royal is one of the largest intercollegiate rodeos in the world, thanks to Cal Poly’s Rodeo Coach Ben Londo. The rodeo attracts more than 15,000 spectators each year and Cal Poly remains one of the most prestigious rodeo programs on the West Coast. 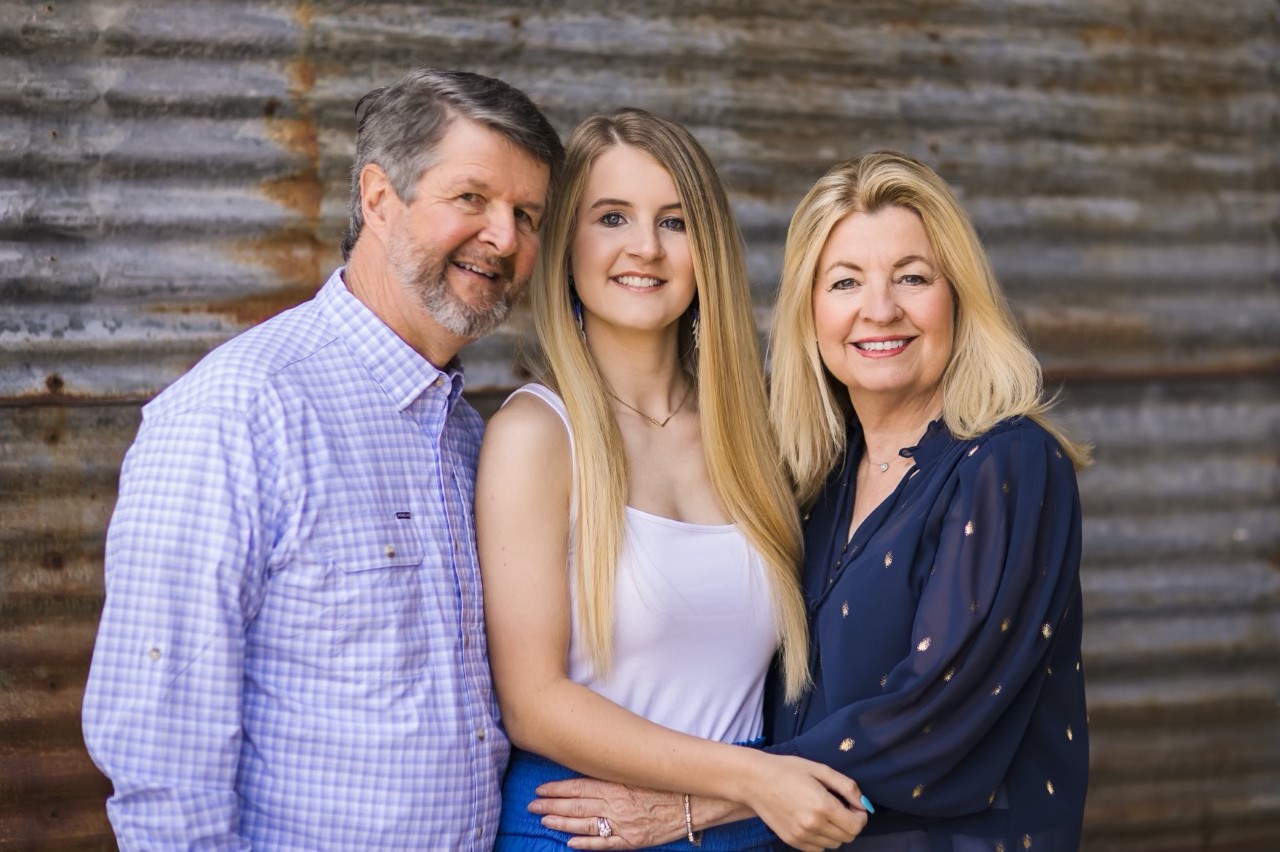 Cotton Rosser (Animal Husbandry, ’52) is credited with helping to establish the annual Poly Royal Rodeo event at Cal Poly. While at Cal Poly he served as the captain of the Rodeo Team and won the All-Around and National Saddle Bronc Championship. In 1956 he purchased the Flying U Rodeo Company and since then his name has become synonymous with rodeo. Rosser is known for his innovations, introducing crowd-friendly components that are now standard in the sport. He has been inducted into the Professional Rodeo Cowboys Association Hall of Fame, awarded an honorary doctorate from Cal Poly in 2013 and in 2015 was elected to the Hall of Great Westerners at the National Cowboy and Western Heritage Museum in Oklahoma City. He is a consistent and enthusiastic supporter of the Cal Poly Rodeo Team and a key reason that the team enjoys such a prestigious reputation today.

The $5 million Cotton Rosser Rodeo Endowment honors his distinguished dedication to the sport while supporting the future of the Cal Poly Rodeo program. Robert Durham and his wife Cheryl, whose daughter Anna Grace is a first-year agricultural business major, donated to the endowment. “When deciding on colleges, we looked at a lot of schools across the country,” Durham said. “Until we found Cal Poly, the schools we looked at either had good academics or a good rodeo program, but not both. Cal Poly was the only university with great academics and a great rodeo program. Coach Ben Londo and the team have built a community that stresses commitment, hard work, teamwork and responsibility—both in academics and in the practice arena.”

Anna Grace said that in the program she has not only been able to continue her passion for rodeo but become a part of a lasting community of people who she can depend on as friends, mentors and teammates. “To have someone who cares about our success in the classroom just as much (if not more than) our accomplishments in the arena holds us to higher standards and motivates us to work hard and stay committed to being the best we can be at all times,” she said.

Durham added: “We are donating today to preserve the legacy of the rodeo program. If it’s good for students like our daughter Anna Grace now, we want it to be good for students to have the same opportunity in the future.”