Home : It's Never Too Soon to Give Back

It's Never Too Soon to Give Back 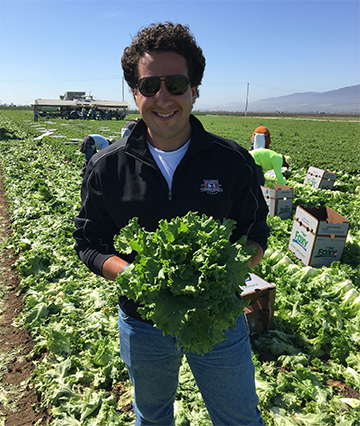 Alumnus Jake Odello, 27, a food safety manager for Foxy Produce in Salinas, California, is giving back to Cal Poly as the chair of the Agricultural Education and Communication Department’s advisory council.

Odello, who graduated with a bachelor’s degree in agricultural science in 2015, is the youngest member of the 13-person council which provides support and advice about the program, its students, curriculum, and other activities.

“I feel very fortunate to be involved and think that having young people involved at a department advisory level is very important,” Odello said. “It makes sense on the surface to seek people that have 10 to 15 years of industry experience but as a new person to the industry, I provide a little different perspective.”

Robert Flores, head of the department, said he was compelled to ask Odello to serve on the council because of his deep connection to Cal Poly and as a way to inspire other young alumni to continue their commitment to Cal Poly.  “Jake was a role model student and he remains a role model as an alumnus of our program,” Flores said. “My hope is that his involvement will inspire others to maintain their connection to our program.”

As a student at Cal Poly, Odello assumed multiple leadership roles, including as president of the Ag Ambassadors for the College of Agriculture, Food and Environmental Sciences and serving on the university’s ASI leadership team. “The student leadership component of the programs offered  at Cal Poly helped me build the interpersonal skills that I rely on today,” Odello said. While he originally planned to embrace his passion for the agriculture industry by teaching, an internship sparked his interest in food safety and he has stayed the course since. He now oversees the preharvest pathogen testing program and compliance areas for the ranches, harvesting and cooling systems of the Nunes Company, which includes the Foxy brand of leafy greens.

In addition to volunteering his time to serve as chair of the advisory council, Odello has also contributed ﬁnancially  to the college. “Cal Poly provided the foundation and opportunities that have allowed me to enter the professional world prepared,” he said. “There are many ways to express your gratitude but hopefully one of those ways is giving back. I encourage people of my age to give back in any way they can.”

Return to the Giving Report to read more.