Rooted in Our History 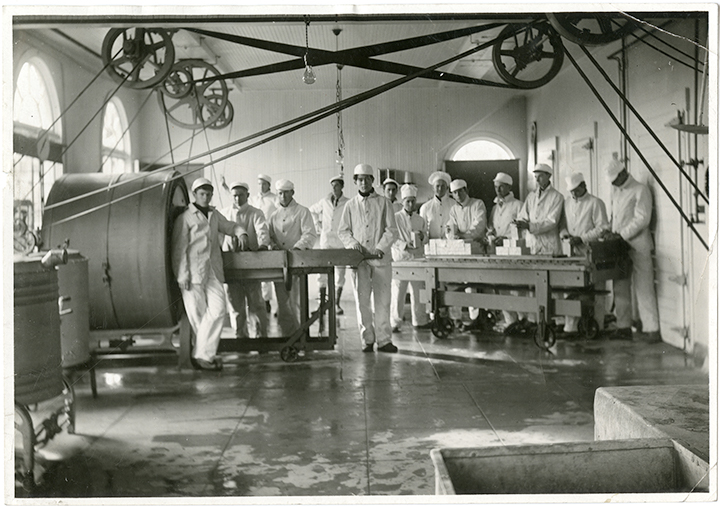 The Cal Poly Creamery is one of the oldest operations of the university, serving as a teaching and research laboratory for Cal Poly students for more than a century.

When the California Polytechnic School opened for classes in 1903, a temporary creamery was located in the basement of the Administration and Recitation Building to support students taking butter-making courses. The first creamery building was built in 1905, but the needs of the students quickly outgrew its capacity. In 1909 a spacious new creamery was completed at the east end of campus (approximately where the Dexter Building stands today). The facility was equipped with “modern apparatuses” for butter and cheese making, refrigerator rooms, an ice machine, classrooms, a laboratory and a reading room. Students produced milk and cheese for the campus cafeteria while gaining practical experience in creamery work. In the early 1920s, the school partnered with the Harmony Valley Creamery Association to manufacture butter in the creamery.

Increases in enrollment and budget shortfalls forced the campus to convert the creamery to dormitories in 1925, and in 1928, the equipment was sold to a Los Angeles dairy. Students in upper-division courses continued to manage the school dairy. After World War II, skyrocketing enrollment brought increased interest in the dairy manufacturing program. In 1949 the school converted the kitchens of the National Youth Administration Building (located at the east end of campus near the site of the present Administration Building) into the creamery and invested in new manufacturing equipment, including rollerless butter churns, a homogenizer, batch and continuous ice cream freezers, and cheese vats.

Students once again began producing milk, ice cream, cottage cheese and cheese, which they sold to the campus community. Creamery managers repeatedly wrote in the campus newspaper, pleading with readers to return milk bottles for reuse, and it was a breaking news story when “prices soared” from 8 cents to a dime for a pint of milk in 1951.

In 1953 the Dairy Production Unit was moved to the northwest area of campus. In 1962 the creamery moved to the Food Processing Building, adjacent to the Campus Store, which students helped manage and supplied with milk, ice cream and cheese.

In 1996 the creamery joined the Dairy Cattle Instruction Center at the Dairy Production Unit (known as the Dairy Unit), where it continues to operate today as the Cal Poly Creamery, with award-winning student-made products sold on campus and at dozens of stores. 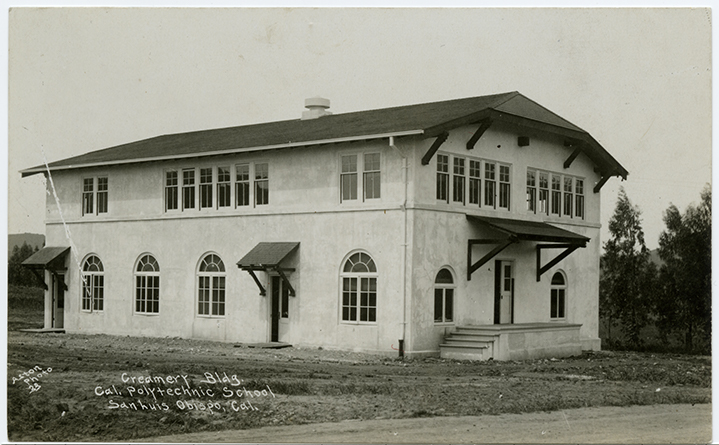 Exterior view of the creamery, circa 1910. The 40-by-60-foot building was located approximately where the Dexter Building stands today.
Photo by Frank Aston. Courtesy University Archives.

To learn more about how you can support the Cal Poly Creamery and our students, please contact Erica Nordby at nordby@calpoly.edu or 805-305-4567.