In the frigid temperatures of Antarctica, a team of Cal Poly researchers recently spent three months studying Weddell seal pups — the most southern-breeding mammal to permanently inhabit the continent.

The furry pups have an innate ability to maintain a steady body temperature while transitioning between two distinct, extreme environments: on the polar sea ice and in the 28-degree sea below.The pups have only weeks to develop the capability to survive both, and Cal Poly researchers are studying the physiology that enables their quick transition from land to sea. 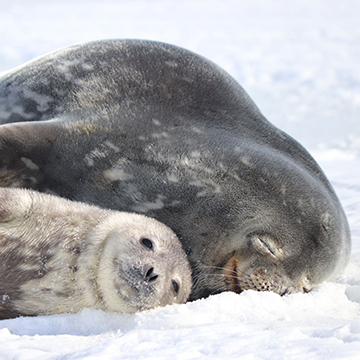 Animal science lecturer and veterinarian Heather Harris, who specializes in marine wildlife and preventive medicine, joined the expedition, which is funded by a grant from the National Science Foundation. The NSF awarded more than $1 million to a team of Cal Poly researchers led by Heather Liwanag, assistant biology professor, Lars Tomanek, professor and director of the Environmental Proteomics Laboratory, and Shawn Johnson, director of veterinary science at The Marine Mammal Center. The center, located in Morro Bay, California, is the world’s largest marine mammal hospital.

The Weddell seal research is permitted by the National Oceanic and Atmospheric Administration (NOAA), which requires veterinarians are present to manage the care of the animals during the research project. Harris, who has forged a strong partnership between Cal Poly and The Marine Mammal Center through her collaborative class, was a natural fit for the project.

“It was truly a privilege to be part of this interdisciplinary team to contribute to scientific knowledge, animal welfare and wildlife conservation in this remote corner of the planet,” Harris said.

The all female Cal Poly team, including Harris, Liwanag, postdoctoral researcher Linnea Pearson, field veterinarian Emily Whitmer of The Marine Mammal Center, veterinary technician Erin Brodie of the National Marine Mammal Laboratory, and former Cal Poly graduate student Emma Weitzner, was stationed at the National Science Foundation’s research facility McMurdo Station, which is located at the southern tip of Ross Island. The facility, which hosts researchers who receive grants from the National Science Foundation, is located 850 miles from the South Pole and is the logistics hub of the U.S. Antarctic Program. “One of the things that surprised me about the field station was how amazing and strong the community is there,” Harris said. “People from all over the world are there to work together in the name of science.”

Before flying to the ice, the team met at the U.S. Antarctic Program facility in Christchurch, New Zealand, to be outfitted with the extreme cold weather gear needed to work outdoors in freezing temperatures. Once at McMurdo Station, they participated in numerous safety trainings prior to starting their work. The Cal Poly researchers then set up their field sites on the frozen ocean about an hour away — which they traveled to each day on snowmobiles or via Pisten Bully (a tank-like track vehicle), at times in temperatures that registered 30 degrees below zero. Yet timing was everything, since only a small window of time existed in which the researchers could gather the metabolic data they needed before the sea ice melted for the season. Pregnant Weddell seals typically give birth in October or November, and the pups learn to dive within only weeks of being born.

It was truly a privilege to be part of this interdisciplinary team to contribute to scientific knowledge, animal welfare, and wildlife conservation in this remote corner of the planet.

The researchers were interested in learning how the pups were able to maintain their internal temperature because scientists don’t yet know what mechanism Weddell seals use to do so. The seals would be captured, sedated and closely monitored by Harris and the veterinary team in order to safely gather blood samples, tissue biopsies, and weight and length data as the pups grew.

Harris spent more than a year preparing for the trip, doing research, gathering and shipping supplies, and seeking the additional permits needed to study the animals under the Antarctic Conservation Act, which is focused on environmental protection and animal welfare. While there, she oversaw the sedation of the animals and their care while being handled.

The seal pups are affectionately named after candy bars, such as Caramello, who earned his name because of his mellow demeanor, and Rollo, who was the biggest pup, weighing a whopping 113 pounds at one week of age. The pups are studied closely in the seven weeks before they were set out on their own by their moms. In all, the researchers studied 10 pups this season. This was the second trip taken by Cal Poly students and faculty for this project; the first included a study of eight pups in 2017.

Harris wrote in a blog post, “The shape of their faces makes them look like they are perpetually smiling. But the most phenomenal aspect of these animals is their other-worldly vocalizations: the chirps, chugs and eerie swirling trills echo all around us from above and below the ice simultaneously.” Weddell seals can grow to 10 feet and weigh about 1,000 pounds. In the wild they can live up to 30 years.

“I am still processing the experience — it was amazing, complex and challenging and helped me to not only grow my troubleshooting capabilities but blew my old boundaries out of the water in terms of science and what is possible,” Harris said. “The experience pushed me to do things I’d never done before while working in an extreme environment. It is both exciting and invigorating to have such an experience to share with my students.”

Harris plans to include students in future research with samples gathered from the trip under the umbrella of a One Health approach, assessing the human, animal and environmental relationship all together to determine what can be learned from the seals, not only for their own conservation but how it relates back to the larger, shared ecosystem. “By learning more about the marine environment they live in and the health of the ecosystem, we are learning about our own health,” Harris said.