Along the windswept shoreline of the Oceano Dunes in southern San Luis Obispo County, loose sand has blown throughout the area to form the distinguished sand dunes that adorn the coastline. The area, part of the Oceano Dunes State Vehicular Recreation Area (SVRA), is the only beach in the state open to off-road vehicles — and is at the center of a delicate balance between environmental sustainability and recreation.

On a recent sunny afternoon, a group of scientists gathered along the dunes’ edge to evaluate a project that was introduced to help reduce dust that is swept to nearby communities, contributing to a rising concern about air quality. Among them, Cal Poly lecturer Mike Bush and Scott Steinmaus, head of Cal Poly’s Horticulture and Crop Science Department, viewed the 48-acre foredune area near the shoreline that was recently cordoned off with orange fencing where work is being done to help mitigate small particulates from blowing inland.

The partnership allows us to build the skill sets of students to be the next generation of restoration ecologists, who will be vital in the kind of work we are immersed in.”

The Horticulture and Crop Science Department was awarded a  four-year, $820,000 grant from the California Department of Parks and Recreation in December 2019 to help restore native plant habitat to the area. Steinmaus, who has  a doctorate in plant biology, is overseeing the project, while Bush, who has an extensive background in horticulture, is managing operations of the project, which entails growing up to 200,000 native dune plants from seedlings each year. Bush has been involved with the restoration of native plants at the Oceano Dunes SVRA since 2018.

“The overarching implications of this project are a benefit to all stakeholders in the Oceano Dunes SVRA ecosystem complex,” Steinmaus said. “Creating native vegetative ‘islands’ between which vehicles may travel will assist in mitigating particulate matter  emanating from the dunes complex to meet the goals of environmentalists as well as recreationists.” The project is a direct benefit to  Cal Poly, he added, as students will use the college’s uniquely situated and equipped Horticulture  Unit’s greenhouses and controlled environmental chambers to propagate the native plants. “This epitomizes the hands-on, Learn  by Doing culture that we cherish  at Cal Poly,” Steinmaus said.

The native seeds, provided by California State Parks, are delivered to Cal Poly, where they are grown in campus greenhouses and cared for by Bush and several students from summer to early fall until they are ready to be transplanted. In 2018, Cal Poly was first contracted to grow 18 different varieties, totaling about 35,000 plants. The plants were transported from Cal Poly  in covered trucks and U-Hauls, moving more than 700 flats of plants to the dunes. There, a team of staff and conservation workers managed by the California State Parks carefully planted the new plants, plus 75,000 more, in areas designated for remediation. That partnership led to the additional four-year contract with Cal Poly. 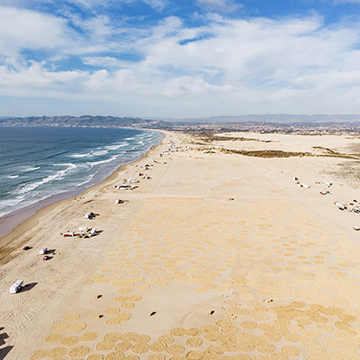 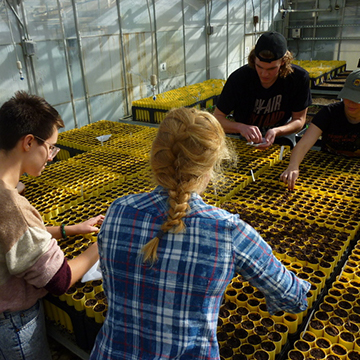 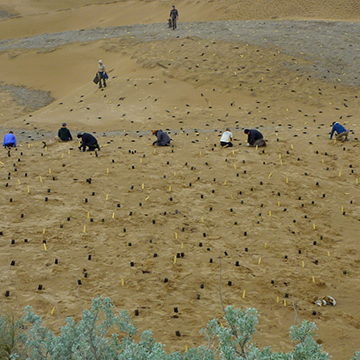 Ronnie Glick, a senior environ-mental scientist with California State Parks, has overseen the environmental programs at the Oceano Dunes for 14 years. “Cal Poly and the horticulture program bring the technical expertise, professional green-house staff, facilities with the right elements needed for growing native plants, and student learners into the picture,” he said. “The partnership allows us to build the skill sets of students to be the next generation of restoration ecologists, who will be vital in the kind of work we are immersed in.”

The most recent plants grown by  Cal Poly were planted in February in the foredunes designated as the next step in restoration. Intricate circles of rice straw nodes measuring 12-feet in diameter were laid in the sand, with the plants positioned strategically in the  center of each area. The dune sand beneath it remains naturally wet, providing the moisture needed for the plants to thrive in the windy environment. The area is fenced off from vehicles and campers, allowing the sand to build up over time and create a natural environment for the plants to thrive and keeping sand particles in place.

“This appeals to students interest-ed in restoration and mitigation,” Bush said. “The reestablishment of plants in areas of development or where a catastrophic event has occurred is an important part of what horticulturists do.” Students are involved every step of the way, including sowing the seeds and transplanting the seedlings into the seed pots — a long process that takes months to complete.

Henry Main, a second year agriculture and environmental plant sciences major, helped to grow both batches of seedlings, taking on the role of the project’s student leader and helping to coordinate other students involved. “For the fall 2018 dunes grow, I spent most of my time transplanting seedlings, moving plants, and preparing greenhouse space,” Main said. “This past grow season I did a bit of everything: sorting and sowing seeds, prepping planting space,  irrigating and fertilizing, transplanting seedlings, organizing volunteer workdays, and making labels.”

Main will now lead the way constructing several hoop style greenhouses on campus that will provide an additional 6,000 square-feet of growing space for the 2020 and upcoming growing seasons. “I plan to continue to improve our processes through-out the grow,” he said. “It is hard to put into words how rewarding and educational this opportunity has been. There are a lot of skills you just can’t learn in class, such as time management, teamwork, long-term commitment, horticultural techniques, and the general wisdom that comes from working on a real-life project.” 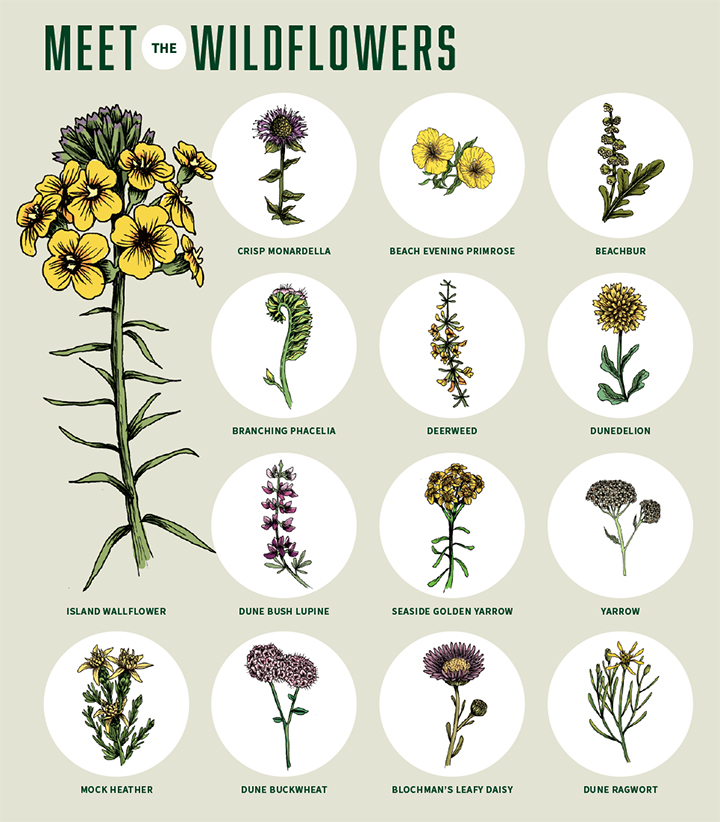