Dan Turner (Natural Resources Management, ‘76) had an esteemed career with the California Department of Forestry and Fire Protection (Cal Fire) before retiring in 2006 with more than 37 years of service. Today he serves as the manager of the San Luis Obispo County Fire Safe Council and is well respected throughout the state as an authority on fire. His path has now come full circle, back to Cal Poly as he helps to establish the Wildland-Urban Interface Fire Institute. 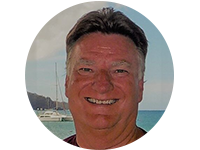 It was all over in six or seven hours. I was standing on Highway 24 looking east at the fire coming at us, and I felt cold air on the back of my neck and saw the fog coming through the Golden Gate. The wind switched and the fire went from unstoppable to done, just like that.

Turner’s career in fire service began young, working as a volunteer and seasonal firefighter for the California Division of Forestry (now Cal Fire) his senior year of high school. It took root when he attended Cal Poly and was asked to work at the then-Cal Poly Fire Department. He was hired full time with Cal Fire in 1974. His ties to Cal Poly remained strong.

Turner’s professional philosophy of unifying resources for consequence mitigation was guided by several key events that he can still recount with impeccable detail. One such event was the 1976 bombing at Hearst Castle. Mutual aid at the time was dictated by clear lines drawn between jurisdictions – meaning that other agencies would not respond to the call for aid until the closest jurisdictional engine arrived on scene. That day, he was the closest engine, despite being more than 50 miles away. “I remember driving north through San Luis Obispo, then Morro Bay, then Cambria, getting angrier and angrier,” recalls Turner. “I was furious that no one would respond until I arrived when they all had a vested interest in helping those in need and protecting the economic driver of the tourist economy in San Luis Obispo County.” It became a mission to convert mutual aid response to automatic aid, essentially boundaryless response, which directs the closest resource to respond, regardless of jurisdiction.

Turner focused his resolve on tearing down the political walls that had long dictated mutual aid calls. In the 1980s he succeeded after working with leaders throughout the state to implement the Incident Command System, which standardized how agencies respond to emergencies. It is still used today by local, state and federal agencies nationwide and is considered a worldwide model for mutual aid response.

As he progressed through his career, Turner continued to see the bigger picture. He witnessed catastrophic fires destroy communities, knowing that something needed to be done to help lessen the aftermath. “It’s not the size of the fire, but the consequences that matter,” Turner said. It is this vision that has led him to be a staunch supporter of the Wildland-Urban Interface Fire Institute. One fire in particular, the 1,600-acre Oakland Hills Fire in 1991, stands out.  “I watched 3,000 buildings burn down in six hours and 24 people died,” Turner said. “I was standing on Highway 24 looking east at the fire coming at us, and I felt cold air on the back of my neck and saw the fog coming through the Golden Gate. The wind switched and the fire went from unstoppable to done, just like that.”

A domino effect of consequences would ripple through the communities after such a fire, leaving people displaced without jobs or homes, basic  service interrupted and a depleted tax base. “I made my focus the consequences of fires and how to mitigate them,” he said. “There had to be a way to make communities more resilient. The costs to the communities far exceeded the cost to put out the fire or the actual physical damage.”

His focus became the things of greatest consequence, mitigating the impacts of the fires that could not be prevented. That is what led him back to Cal Poly to focus his efforts on the Wildland-Urban Interface Institute. “We have to take a holistic approach and truly understand the consequences of these fires beyond the firefighters and those being initially harmed,” Turner said. “It is about involving all the other stake-holders who have a role to find potential solutions.”

Cal Poly, he said, is the only college that has a wildland urban interface component to its forestry program. In fact, he helped to facilitate a class dedicated to the subject in the 2000s, which he still helps teach today. “It was the first course of its kind in the country,”  Turner said. “It established Cal Poly on the WUI issue, and the university remains at the forefront of it.”

For Turner, it is about tearing down the walls as he once did with mutual aid response. “It is about creating a center of excellence for collaboration among people who are already doing critical research,” he said. “It is about looking forward and trying something different. It is about reaching out to industry, stakeholders and outside organizations  and bringing them together to guide, counsel and advise on what needs to be done to mitigate the  consequences of what we know is inevitably coming.”