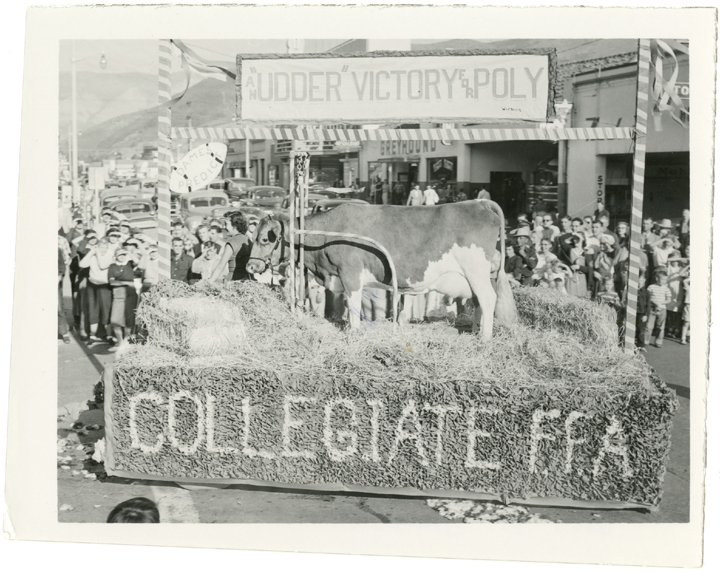 Since 1924, Cal Poly has celebrated Homecoming. The first Homecoming provided an opportunity for alumni across the state to come back to their alma mater to reunite with school friends, recall their Cal Poly memories, and visit the expanding campus. Every fall, Cal Poly still welcomes alumni back to campus for Homecoming Weekend, which includes a home football game, events honoring alumni, and various activities across campus.

The Homecoming Parade was introduced in 1949 at Cal Poly. A high point of many Homecoming celebrations in the 1950s and 1960s, the parade featured elaborate floats assembled by student clubs, the Cal Poly Marching Band, honored guests, and a special float for the Homecoming Queen and her court. The parade wound its way through downtown San Luis Obispo and was a major draw for the Cal Poly community, alumni and the San Luis Obispo community.

This photo captures the Future Farmers of America float at the 1952 Homecoming Parade. In 1952, the parade theme was “There is Nothing Like a Dame,” reflecting the general campus excitement for a future in which Cal Poly returned to enrolling both men and women students. (Women were not allowed to enroll from 1930-55.) The FFA showed its optimism for the outcome of the Homecoming football game by exclaiming on its float, “Dames predict an ‘udder’ victory for Poly.” Although the outcome of the game against Whittier College was described by the El Mustang newspaper as a “disappointing loss,” the parade and the rest of the homecoming weekend was “generally hailed a smashing success.”

Read about Chantal Herrera, an agricultural communications student named to the 2018 Homecoming Court.