The wildland-urban interface (WUI), where housing and wildland areas meet, and the fires that result are wreaking havoc on California as they increasingly cause hundreds of millions of dollars in  damage each year and a growing number of lives are lost. Each  year, the fires continue to grow in size and magnitude, while the accompanying losses become more severe.

This problem is not going to be solved by more firefighters or firefighting equipment.

There is no single, easy solution. But something must be done. Cal Poly is working to establish an interdisciplinary Wildland-Urban Interface Fire Information, Research, and Education (F.I.R.E.) Institute to facilitate the research, education, training and outreach needed to address the catastrophic problem in California and beyond. The institute would facilitate a partnership between academia and external stakeholders. A holistic approach to reducing the impacts of such fires is needed; there is currently no such institute in the United States.

“Wicked problems need interdisciplinary solutions and the brainpower to solve them,” said Jim Prince, associate dean for research and graduate programs in the College of Agriculture, Food and Environmental Sciences. “At Cal Poly we are already working with partners at Stanford, UC Santa Barbara and other outside institutions. We can’t just keep spending more money every year on fighting fires. Collectively we have to figure out how we can reduce the damage from them and plan smarter communities.”

Cal Poly faculty and researchers in multiple areas of study, such as forestry and fire ecology, city and regional planning, construction management, landscape architecture, economics and fire protection engineering, are already doing research to find ways to alleviate the impacts of urban encroachment on wildland areas, yet they are doing it individually or in small groups. The institute would unify that effort and provide a path to meet the needs of today’s society by partnering faculty and students with stakeholder organizations.

“Cal Poly is poised to prepare future leaders using a holistic approach that encompasses forestry, city and regional planning, fire protection engineers and beyond in a coordinated effort with public agencies and industry to a path to long-term resiliency,” Turner said. “It took 100 years to get here; it will take time to fix it.” 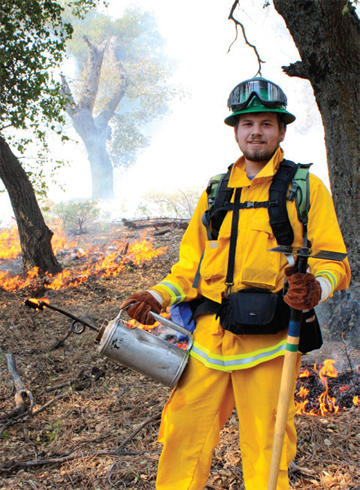 As both housing and commercial development continues to encroach on environments that are naturally dependent on fire to regenerate the ecosystem, disasters such as the recent Thomas Fire and mudslides in Ventura and Santa Barbara counties will continue to escalate.

Fires in wildland-urban interface settings now represent the most frequent source of declared disasters in California and are occurring at an increased frequency.

The threat of wildland urban fires will continue to grow because of demographic trends and climate change. “This problem began by continuing to build in ecosystems that are fire dependent. Just as we need rain, these natural ecosystems need fire,” said Chris Dicus, professor of wildland fire and fuels management in Cal Poly’s Natural Resources Management and Environmental Sciences Department and president of the Association for Fire Ecology (AFE), an international scientific society that promotes sound wildland fire ecology research, education and management. “When we choose to build in such an area, we have to understand that by the nature of California, it is going to burn.”

The complexity of these WUI fires exacerbates the problem – they require both wildland and structural fire protection, which has long been viewed as two distinct problems. The Wildland-Urban Interface F.I.R.E. Institute will combine the efforts of both to enable suppression and community resiliency.

“This problem is not going to be solved by more firefighters or firefighting equipment,” Dicus said.

There are few people living in California who have not been touched either directly or indirectly by the impacts of such fires. “Wildfires touch nearly everyone in California,” Dicus said. “Whether it’s an individual whose home was lost or a community whose critical infrastructure is compromised or its citizens’ health threatened because of smoke.” 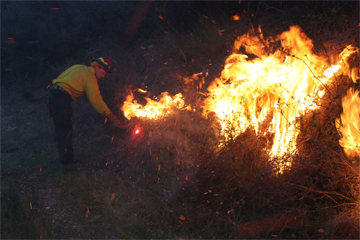 In December 2017 the Thomas Fire burned 281,893 acres, destroyed 1,063 structures and left 26 people dead. In the months prior, a series of fires in Sonoma and Napa counties destroyed nearly 9,000 buildings and left 44 people dead. The devastation is not isolated to California. In recent years, similar fires in Texas, Colorado and Tennessee have destroyed nearly 5,000 homes and killed more than a dozen people.

From 2011 to 2015, the average amount of damage caused by wildfires in California per year was $679 million. The average cost of fire suppression per year was $413 million. Those figures do not account for the larger economic toll that results in communities devastated by a fire, such as lost jobs and diminished resources.

“If we look at wildfire as a war, we need to prepare the battlefield for the hardworking firefighters on the front lines,” Dicus said. “We can only do that with a holistic approach, such as proper landscaping, building homes in such a way that utilizes fire-resistant materials, and by using established fuel treatments in wildland areas adjacent to communities.”

Yet, smart building designs and materials, land use planning, and management of wildland ecosystems as a prevention and management tool are just the beginning. Elements of political science, economics, emergency preparedness and response, and public education are also necessary.

The solution lies in a partnership of shared responsibility between public agencies and the community. The Wildland-Urban Interface F.I.R.E. Institute will serve as the center of that collaboration.

“We know what is needed,” Dicus said. “We are now seeking various avenues of funding from the public and private sector, all of which have a stake in this to move it forward.”

“Cal Poly is well suited to lead the effort,” Prince said. The university has the only Fire Protection Engineering Program west of the Mississippi. Ongoing research on fire-related issues, the economic impacts of fires, and best practices in landscape architecture and city and regional planning are already underway. Students work with real-world applications in both research and directly in local communities.

The goal is to reduce the cycle of repetitive costs and losses associated with fires in the wildland-urban interface by taking a holistic approach moving forward. Cal Poly will serve as a center of excellence in all areas: prevention, mitigation, preparedness, response and recovery by engaging public officials, fire and emergency managers, private industry and by conducting training and educational programs to lessen hazards and improve safety and effectiveness. “At Cal Poly we have a long history of doing applied research and serving the needs of California,” Prince said. “We have a critical mass of people here, ready to move forward. The institute will unify and grow our ability to offer solutions, a crucial need in California.”

Looking to the Future 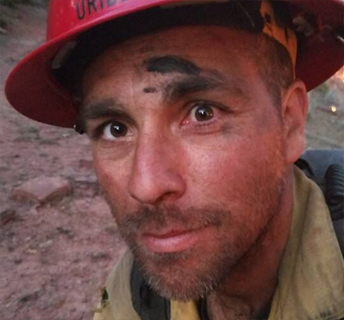 Rudy Uribe, 38, worked for the U.S. Forest Service in the Los Padres National Forest for seven years before enrolling at Cal Poly to pursue a master’s degree in forestry sciences. Growing up in the small Northern California area of Middletown in Lake County, Uribe experienced what it was like to live in a wildland-urban interface, with fires a common occurrence in his hometown.

“I watched as we kept losing these communities over and over again, and I became interested in getting involved to see what I could do to improve the situation,” Uribe said. While working in the national forest, he worked the line, fighting fires deep in the forest. He decided to pursue a master’s degree to move into upper management and do more behindthe- scenes pre-fire planning and mitigation.

Uribe’s master’s thesis will analyze which homes were spared and those that were not during the Thomas Fire in Ventura and Santa Barbara counties. He hopes to find commonalities that might demonstrate effective prevention tools. Topography, building materials and fuel reduction treatments such as prescribed fires and cleared lines will all be considered. “Ventura has aggressive fuels management programs that requires homeowners to clear potential fuels such as overgrown vegetation. But that didn’t work,” Uribe said. “What can we do better?”

He advocates for more prescribed fires in urban areas as a cost-effective way to remove surface fuels such as excess vegetation, which are a primary cause of fires in urban communities. “The general public doesn’t always understand its role in fire prevention. The build up of debris and vegetation around homes leads to fire,” said Uribe. “Once one house catches on fire, it creates a domino effect.”

Fire, he said, is a natural part of the environment. “There are plants that have fire adaptive traits and that have evolved to adapt to fire; redwoods can’t sprout without fire,” Uribe said. “Just because an area burns doesn’t mean it is ruined. Prescribed fire isn’t going to destroy that land, but it will remove dead fuel and the area will come back abundant.” 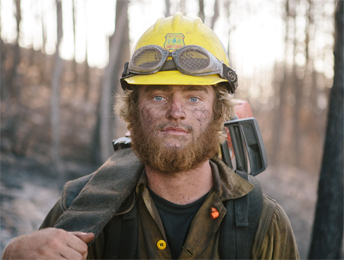 Charles Watkins, 20, is a junior majoring in forestry and natural resources, concentrating in wildland fuels management. Each summer he works for the U.S. Forest Service in the Los Padres National Forest on a 20-person hand crew fighting wildland fires.

“We hike into the forest to where we cut fire lines using chainsaws and axes to remove vegetation to stop the fire from advancing,” Watkins said. “Not all fires can be put out with water, but fire has a hard time crossing bare mineral soil.”

Last summer he worked the Holy Fire, a wildfire that burned in the Cleveland National Forest in Orange and Riverside counties, burning more than 23,000 acres and destroying 18 buildings. He also worked the Box Fire in San Bernardino County and smaller fires throughout San Luis Obispo and Santa Barbara counties. Prior to that he was called during finals week to work the Thomas Fire in Ventura and Santa Barbara counties, where he stayed until Christmas Eve.

During the Thomas Fire, he worked tirelessly above the coastal town of Montecito, trying to stop it from advancing beyond the forest. Yet the fire burned hot, eventually crossing fire lines.

The reward, he said, comes from working hard and knowing that you have done all you can do. “A lot of times you are out in the middle of nowhere and there is no one to see the work that has been done,” Watkins said. “But when you turn around and look to see the fire line and one side is charred and the other green, the finished product is the most fulfilling feeling in the world.”

Watkins initially planned to pursue a job in municipal firefighting but became passionate about wildland fires after taking classes in it his first year at Cal Poly. “It all ties back together – and is becoming more and more of an issue,” he said. “Fires are now burning from forests to neighborhoods.”