Patricia (Williams) Sciacca (Wine and Viticulture, ‘18), a senior laboratory assistant at Artesa Winery in Napa, grew up among the vineyards on an estate that her grandparents owned on Atlas Peak. 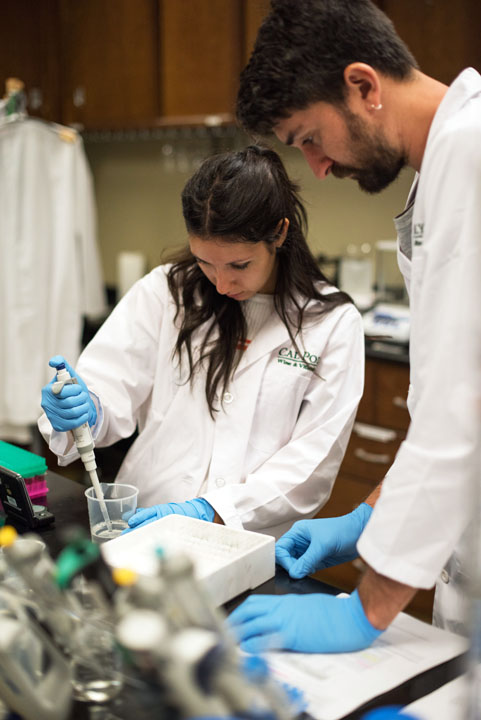 “My grandpa was an Italian immigrant, and while wine was a passion and side project while he ran other businesses, wine and viticulture were always a large part of my culture and heritage,” Sciacca said. “My family lost everything in the 2017 Atlas Peak fires: three homes, a wine cellar and a winery. The only building left standing on the property was a little chapel that my grandpa had built when I was younger. The chapel was untouched, free of any fire damage.”

The loss didn’t dampen her dream of pursuing a career in enology — something she has always loved because of its blend of science and art.

During her time at Cal Poly, Sciacca worked alongside Associate Professor Federico Casassa in the wine and viticulture research laboratory. Among other projects, she explored the effect of a winemaking technique called cofermentation on wine phenolics, which affect the taste, color and other sensory experiences of wine such as how it feels in your mouth when consumed.

Sciacca and four other recent wine and viticulture alumni co-authored two articles with Casassa on the research they completed while students at Cal Poly. The articles were published in distinguished scientific journals.

“I learned by doing things with my own hands, going through the motions, and then applying my education and experience to the task at hand,” Sciacca said. Sciacca’s research on the chemical and sensory effects of cofermentation began as a senior project by graduate student Paul Mawdsley who sought to better understand the impacts of fermenting two different grape varieties (a red and a white) in the same tank, versus the typical method of blending them together after fermentation.

“The end goal is to supply the wine industry with formal and tangible data on current winemaking practices that are performed because they are tradition or established,” Casassa said. “We don’t know the impact of those practices until they are tested under a controlled environment.”

Casassa also recently published an article in the Food Chemistry journal on a study done with two undergraduate co-authors that evaluated the results of leaving pomace (fermentation solids, such as skins and seeds) in contact with wine for longer periods of time and adding additional pomace post-fermentation in Pinot noir and Zinfandel varieties from the Central Coast.

Involving undergraduates in applied research gives them additional tools that help them succeed upon graduation, Casassa said. “Their knowledge exceeds the industry expectations of what a standard [college] graduate might have,” he added.

Sciacca agrees, “These skills directly translated to my work beyond Cal Poly. In both internships, and now at my full time position, winemaking, especially during harvest season, can be quite the balancing act. My time working in the research lab helped me to be not only a better student and grow my passion for analytical winemaking, but also to be a better professional.”